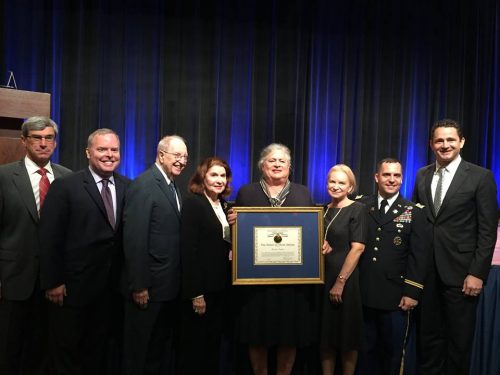 Colonel Pritzker is proud to have been awarded the 2016 Spirit of Hope Award, sponsored by the U.S. Department of Defense. Comedian Bob Hope was legendary for his support of the U.S. armed forces, having entertained them all over the world for almost 50 years. He headlined 57 U.S.O. tours through four wars, often in harm’s way. As a tribute to him and to those who reflect the same level of commitment, the U.S. Department of Defense has selected recipients annually for its Spirit of Hope Award since 1997. These men and women—nominated by each branch of service embody the character and selflessness of Hope in activities that support the military.

“The honorees epitomize the values of Bob Hope: duty, honor, courage, loyalty, commitment, integrity and selfless dedication,” said Robert Work, deputy secretary of defense. “Each has generously offered and contributed an extraordinary amount of their time, talent and resources to enhance the quality of life of service members and their families around the world.”